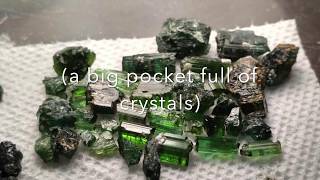 It was a mild winter. In fact, it was the first time that we have ever mined through the entire winter without stopping.

Between Jan 1st and almost the end of the month, we went about 4 times and pulled out 10-15, 5-gallon pails of material out at a time. And bit-by-bit the amounts of Tourmaline started to increase.

It was exciting because we had not found any gem at this location Mt. Rubellite in Hebron Maine for 6 years

On January 30 my mining partner Gary Howard and I (who both the lease) began finding some incredible Tourmaline crystals.

On January 31st it opened up into a massive pocket.

Between Jan 30-Feb 2nd and we pulled out 90 five-gallon pails of material, including roughly 38 thousand carats of gem Tourmaline. It was mostly emerald green and some pink.

The cut gems were fantastic.

We found Morganite, Goshenites and some Cassiderites along with a bunch of other quartz crystals and assorted minerals

18 feet deep under the hanging wall. There seems to be a honeycomb of tunnels that lead off of that pocket going in every direction.

We eventually opened up the upper quarry where most Mt. Rubellite specimens come from. This pocket was in the bottom quarry.

It is not open to the public