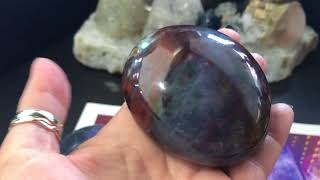 All forms of agate honor the Greek goddess of the night: Nyx – who is usually seen riding in a chariot, trailing stars and painting the night sky. Agate is strongly associated with Nyx because of its ability to ward off stress, nightmares, and all forms of negativity. This stone has been mined at a number of historic sites, which indicates its varied and widespread use in ancient civilizations.

Use your meditation stone to access the deep information available to you both within and in the ethereal, allowing its wisdom to inspire and ignite your greatest creative expression!