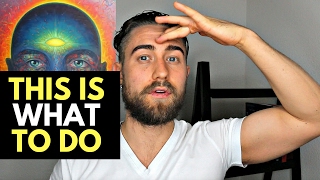 “Welcome back to another video. My name is Aaron, and I help people expand their consciousness. Now, this video is going to be me explaining the most powerful technique that we can use for opening our third eye or activating our pineal gland, and this is something that I learned early on when I was meditating. I learned meditation like four or five years ago, and it really changed my perception.
”
“What I’m going to do in this video is explain the idea of the third eye from a new practical point of view taking the woo-woo out of it so that we can really apply it because sometimes, there’s like such esoteric or these like such out-there concepts that it’s so hard to relate to. The first part of this video is going to be me explaining it in a very more relatable way, and then from that point, giving you the technique that I found that is just so powerful, and really, it’s an ancient technique that’s been around for a very long time.
”
“Just to start this out, what I want to do is explain the idea of the third eye and understanding it from a more practical point of view, and it’s really just seeing it like this. We have what are called our like eyes, like our physical eyes, and the idea and the symbolism of this is that we see in a dualistic way, which means we have good, bad, light, dark, evil, whatever, and love. It’s the idea that there’s that contrast because we’re seeing through a perceptual lens of duality having … and symbolized by the two eyes.
”
“Now, the idea is that the pineal gland, which is inside the brain, the third eye, once we open up that eye, it’s like the attention goes away. We’ve transcended the dualistic nature of our eyes, so I’ve seen everything as good and everything as bad. When we transcend the good, and the bad, and the attachment to ideologies, the limiting beliefs that we might have when we start to observe them rather than react to them, which a lot of times, when we’re seeing through those eyes and we’re in reacting, that’s what we’re doing is we’re reinforcing that reality. That’s when we don’t actually have our “third eye” activated, but the way that we can look at this is that when we begin to activate our third eye is when we let go of all those ideologies attached to dualism, attached to everything being good or bad based upon what we believe to be true.
”
“When we begin to do that, that’s when we really begin to then shut off the reactive mind, and we begin to turn on a more imagination. We begin to turn on more of the intuitive centers of our mind. Look at it like this. We are already connected to some higher source, whatever we want to call it. The only reason we might not be experiencing it is because there’s too much mental chatter. There’s too much condition beliefs. There’s too many limiting beliefs and attachment to ideologies that are holding us back from actually experiencing that connection, so the first part of this is realizing that that connection is already there. It’s just a matter of, are we tuned to it? Are we paying attention to it? Are we feeling the intuition? Are we feeling that connection? Are we focused on it?
”
“A lot of times, we are more focused and immersed into the dualistic nature and to these two eyes, but if we simply understand that if we put the attention on the idea of the intuitive part of our brain or the intuitive part of how we can see things, tapping into that by feeling rather than thinking so much or rather than reacting so much, we then begin to tap into having more ability to connect to that, and that connection, like I said, is already there, but the way that we get rid of all that baggage, rid of all that noise is by observing rather than reacting. When we begin to let go of those ideologies, we will naturally start to have that point to where we then see through our “third eye.”
”
“I hope this explanation for you gives you a little bit more understanding before I explain the technique because it makes you understand that that connection is already there. It’s not about you having to re-establish it. It’s more about you just opening it and being able to see through it. Now, the way that we open our pineal gland or pineal gland or our third eye is by simply first off detaching from the reactive and the reactivity of the dualistic nature of the beliefs, of the conditioning, and a simple way to do this is in meditation, and for this, all you simply have to do is sit on the ground.
”
“You can do it cross-legged if you prefer. You can focus on your breathing, and as you begin to do that, and you can … Something I do is I stare at a candle flame. I find that that helps my mind from wandering so much because I find that when my min wander, my eye … because I find that when my eyes wander, my mind also wanders as well, so what I do is I just focus on that candle flame. As I begin to …