10 Things You Didn't Know About Turquoise 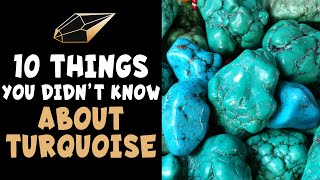 1. The Origins of Turquoise

As turquoise artifacts have been found in almost every part of the world, it’s hard to say exactly where it was first discovered or what it was called before it got the name we all use today. The name itself is French, pierre turquoise meaning Turkish stone which was given due the country’s position between Europe and Asia which made for vast amounts of trading. Beads have been discovered in Iran dating back to 5000 BC, in Egypt to around 3200 BC, and its uses by Native Americans date back to 1000 years ago.

Turquoise has been used since antiquity by many civilizations in ritualistic practices, by the Mayans, Egyptians, and Native Americans in particular. They believed (possibly due to the stone’s association with communication and spirituality) that it held divining powers and it would often be used to call upon spirits, specifically the God of the Sky. It was also used to guard burial sites as it was believed to enhance communication between the physical and spiritual worlds.

3. Turquoise as a True Protector

A lot of the legends surrounding turquoise tell of its ability to protect the wearer from a spectrum of misfortunes. It is said to protect from falls, specifically from horseback and that affixing a turquoise stone to the bridle of a horse will protect the animal as well as the rider. Another superstition states that a turquoise stone will crack to protect its wearer from harm and its color will fade to warn of an impending illness. For these reasons, it was often used in sword hilts, shields, and amulets. In one story, a man thought he had broken his leg and later found that his turquoise had made the cracking sound he heard – it had taken the injury in his place. The Apache also believed that attaching a turquoise stone to a bow would improve a hunter or warrior’s accuracy.

For the Aztec Mayan civilization, turquoise was of great value and held an important seat in their traditions. During the 16th century, Spanish conquistador and historian, Bernal Diaz del Castillo observed that the Aztecs valued chalchihuitl (turquoise) more than the Spaniards valued gold or emerald.

The southwest Native American tribes have been mining and using turquoise in religious ceremonies, trade, art, jewelry, and negotiations for almost 2,000 years. The value it holds in their culture is one of more spiritual recognition than monetary, as it is believed that the stone possesses many varying benefits to both the mind and the spirit.

As turquoise’s significance lies heavily in the relationship of its colors to that of the earth, sky, and water representing life, it’s no wonder this stone is prized among many Native American cultures for its powerful healing abilities. In Navajo legend particularly, many tales involve the mention of turquoise as beneficial to health and a bringer of great fortune.

Among the Zuni Indians, a legend tells the story of Turquoise man and Salt woman. The Zunis say the Goddess of Salt was so troubled by the people living on her domain of the seashore, taking everything and giving nothing that she forsook the ocean and went to live in the mountains. Whenever she stopped near a pool, she would turn it to salt water and for these reasons, many of the water in these basins are bitter.

8. Turquoise Legend across the World

Among the many beliefs and superstitions surrounding turquoise across different cultures, the essence remains the same: turquoise is a versatile healer. In Iran, a legend tells that if a person can see the reflection of a new moon on the surface of a turquoise, he shall have good luck and be protected from evil.

Since antiquity, turquoise has been known to offer a wide range of healing benefits to the spiritual and mental states. It is believed to hold the power of stress-relief and the ability to enhance intuition, gifting the wearer with wisdom and wit, through eloquent self-expression.

Given its association with protection in all forms, it’s no wonder turquoise was often used in many medical practices throughout history. It was considered an effective remedy against tumors, ulcers. Intestinal diseases, and epilepsy.