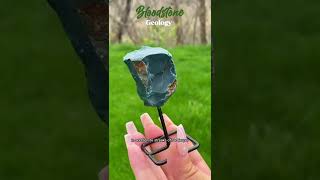 Bloodstone is a cryptocrystalline mix (an aggregate of a multitude of small crystals) of Quartz. Also known as Heliotrope, Bloodstone gets its name from the Greek words “helio” and “trepein”, with helio meaning “Sun” and trepein meaning “turning”. Bloodstone is a dark green variety of Chalcedony and gets its color from traces of iron silicates. Its red spots are the result of Red Jasper that is distributed throughout the rock. The red coloring from the Red Jasper is a result of the presence of Hematite. Bloodstone is formed through the deposition from low-temperature, silica-rich waters that percolate through the cracks and fissures of other rocks. It occurs in massive formations and it ranges from dark green to greenish-blue or greenish-black. It can possibly be found as a translucent to opaque color with a waxy, resinous luster. In addition to its streaks of Red Jasper, some formations can possibly contain inclusions that are yellow or white, while some specimens can lack any inclusions at all, leaving the crystal entirely green. In ancient times, Bloodstone was known as the “Sun Stone” and later on “Christ’s Stone”. During Medieval times, it was believed that Bloodstone formed when Christ’s blood dripped onto the dark green earth after his crucifixion and turned to stone. It was also used extensively during ancient times as signet seals and in jewelry, as well as being carved into decorative cups, small vases, and statuettes.