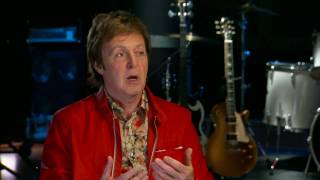 http://tm.org Paul McCartney reminisces about the first time he and his bandmates met Maharishi and learned the TM technique.

[Not a paid endorsement.]

David Lynch: First of all its a real big honor to interview you, to talk to you Paul, and I’ve got to tell you I am not a professional interviewer. But I’m curious. So I’ll just ask you some things. And I’m curious– I assume some time in the sixties, set the stage, when did you first hear the word meditation and what did you make of it?

Paul McCartney: It was actually George Harrisons wife, Pattie, who had heard that Maharishi was coming to town. And she said we should all go. It was one of those things. And I was personally not in a good place. I think you know just over doing it in the sixties. So I was just not very–sort of –centered and I was looking for something. I think we all were. So we heard that Maharishi was going to have a meeting and give a lecture. So that was the first time Id heard about meditation. But we’d actually seen him when we were kids growing up in Liverpool. Because as you know he went around the world seven times to spread his message. And he was on TV. And we remembered this giggling little guy and we thought, we loved him. We just said he’s so cool! you know. And he was just on TV, and he was giving an interview and he would giggle–that fabulous laugh of his. And he was very entertaining and very attractive. So we all said that’s that guy! But then I say, he was giving a lecture.

David Lynch: Where was it?

David Lynch: But do you remember the place?

Paul McCartney: I don’t remember it. I think it was in Kensington, Chelsea or somewhere. But—so that was the first time I heard about it and we all went along to listen.

David Lynch: And in the talk—what feeling, you know, came over you about what he was saying–his message?

*Note: Paul McCartney and all the Beatles learned Transcendental Meditation from Maharishi Mahesh Yogi in the 1960’s.