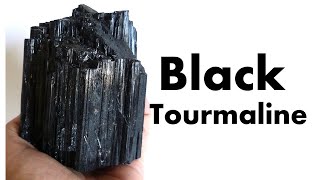 • BLACK TOURMALINE is used for protecting one’s energy field against negative vibrations, and also for drawing negative energies away from a person. It can have a calming effect when needed, grounding flighty or scattered energies into the earth.

• Black Tourmaline, is associated with the root or base chakra, and is excellent for grounding excess energy. It is a well known as a purifying stone that deflects and transforms negative energy, and thus is very protective. It can transform and remove negativity from an individual or an environment. It is often used as an aura cleanser, and can help one attain higher levels of awareness.

• By balancing the energy in the body and helping to eliminate toxins, black tourmaline healing properties include the power to banish stress, calm anxiety and promote emotional stability.

• It is very protective. It can transform and remove negativity from an individual or an environment. It is often used as an aura cleanser, and can help one attain higher levels of awareness.

•used for repelling and protecting one from black magick, evil spirits, and is often said to return the negative spell to the sender.
• As it emits negative ions, black tourmaline helps to shield the potentially harmful effects of electromagnetic radiation from televisions, computers and mobile phones.

• Placing black tourmaline underneath your pillow is said to protect from nightmares and stimulate deeper sleep.
• It boosts the immune system and is known to be effective in relieving the pain of muscular disorders.

• Many people report some relief from arthritis and back problems.

• Black tourmaline, worn on the body, can also help to prevent cholesterol build up thus helping those with heart disease or circulatory disorders.