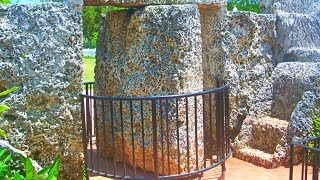 We are at coral castle in Florida, and let’s take a look at the most mysterious structure in this castle – called the 9 ton gate. This 8 foot tall revolving gate has not only baffled common people but has also challenged modern day engineers. By the end of this video, I hope you will agree with me that this gate could not have been built by a single man unless he knew some kind of a secret ancient technology.

The nine ton gate no longer works, but here is a smaller 3 ton gate which still works. Edward Leedskalnin considered the 9 ton gate as a master piece and named this place after this gate, so the original name of Coral castle was Rock Gate Park. Ironically the door did not get much attention from experts before it stopped working in 1986. So the owner initially calls a local construction crew and they take a good look at this gate and tell him that they have no idea how to fix it. Now, the owner decides to call the quote on quote “educated engineers” and calls the University of Florida. They send in a team of 6 engineers and they arrive with plenty of modern equipment including a 20 ton crane. Now, keep in mind Ed did not use any modern equipment and built this door without anyone’s help.

When the engineers took the door down, they saw that Ed had not only modified simple car parts like axle shaft and ball bearings of a 1918 ford truck, but had also used a strange circular stone at the bottom. The engineers couldn’t understand how this Frisbee sized rock could withstand 9 tons of weight. So, they sent it to the geology department in the University of Florida. Guess what happened? A month later, the expert geologists simply returned the rock to coral castle and told the owner “hey, We have compared this rock with almost all other types of rocks on this planet, and we have even compared it with meteorites, but we cannot determine the origin of this rock. “So, where did this rock come from? How did a man with a fourth grade education who rode nothing more than a bike, get a hold of this rock?
Anyways, the engineers put the gate back with new shaft and new bearings, but removed the rock because they were the experts and they could do better than the uneducated Ed Leedskalnin. You know what happened? It got stuck, and did not move. Believe it or not they had to shave the rock down, to make it work. This just proves that 6 experts with all their modern techniques could not duplicate what Ed had done single-handedly without modern equipment or techniques.

Now the original door which lasted from 1936 to 1986 could be moved by an 8 year old girl with one finger. After 1986, it was not that easy, but a grown man could move the door with one hand. But it only lasted until 2004 and then it ceased. At that time, 3 different teams of engineers looked at it and basically said “Leave it alone, it could crack open like an egg”. Because this rock is made of honeycomb coral, which is very brittle and it will break if you give a strong tap with a hammer. How could Ed quarry and cut this huge stone without breaking it? And how could Ed drill a hole exactly through the center of balance even though this rock is not a perfect rectangle?

Now, he claimed that he could build Coral Castle because he knew the secret behind the construction of the great pyramid. Strabo, a Greek geographer found a similar revolving door in the pyramid of Giza. He has documented that in 24 B.C while exploring the Pyramid, he stumbled on a large rectangular door made of rock. He mentions that this door leads to a long, narrow passage and when the door is shut, it is so perfect that it seems like any other rock in the Pyramid. Today, experts are still searching for this door. This raises the question if Ed really knew the secret behind the Pyramid of Giza? Is that why he was able to build a similar door in Coral castle?